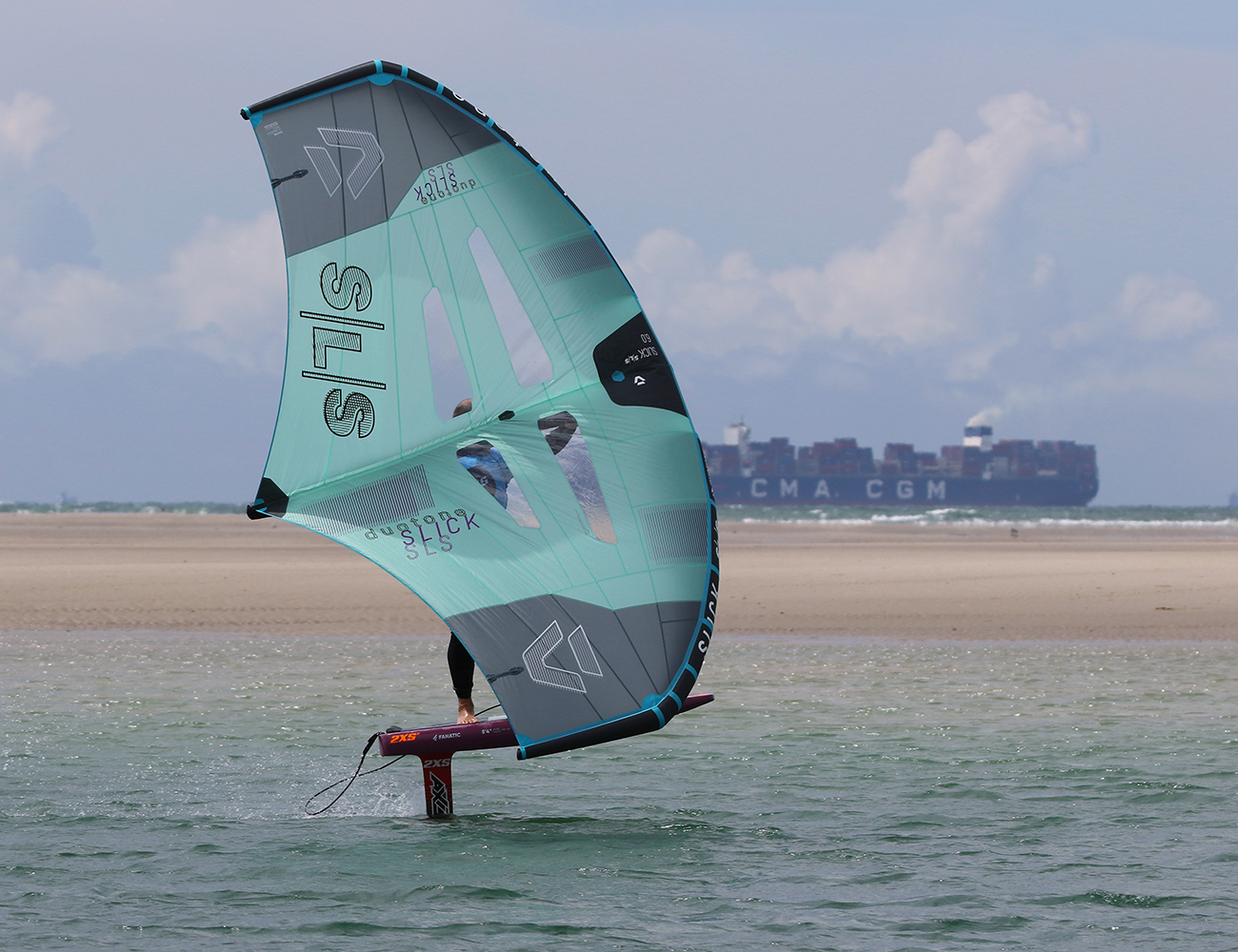 We were pretty excited to get our hands on the new 2022 Duotone Slick SLS – we have been massive fans of the boom driven Duotone wing since the launch of the Echo then the Slick in 2021.   Since Duotone launched the new Unit version 2 last year there has been alot of design work done –  new material, new panel layout, tighter canopy, stiffer centre strut and leading edge – with the addition of the new handle system that is attached to the centre strut.  Two dump valves, one positioned on the wing tip.

The New Duotone Slick SLS has the new backpack style bag – easier to roll your wing up and slide it in.  The Slick SLS currently uses the same boom as the first version – there will be a  new Slick boom, same diameter as the new Unit Handles, which will cost £200 and will be available August.  There is an improved velcro  fitting for the front of the boom which looks less prone to twist .

What you notice soon as you pump the wing up it that it’s  super light – the SLS material is considerable lighter than the old Slick –  the leading edge and centre strut also has new material . The fabric feels crisp and has more tension within the new panel layout . Wing tips are more aero dynamic and have more taper towards the tip.  The centre strut has more shaping with more lift towards the trailing edge.  The new window layout gives good visibility without adding too much weight.

What I noticed was with the narrower profile wing tips and new canopy shape I could hold a tight angle up wind and keep the wing tip close to the rail of the board.  As I got over powered in the gusts the wing didn’t distort and felt completely under control.   Going downwind and gybing the Duotone Slick SLS has improved performance it feels more balanced -less  wing  tip roll and doesn’t stall at low speed through the gybes .

I am always getting asked would  you chose the new Unit over the Slick model – well for me I have both  Slick 6.0 down to 4.0  and 5.0 and 4.0 in Unit.  They both feel different – the Unit  will do everything you need and is more popular for wave riding, however, the more all round  Slick is good in all conditions and I have seen Nik Baker riding waves with the Slick on the South Coast and totally ripping it.

I think if you like the windsurfing feel of the boom – the Slick is right up your street and gives you positive control over the wing and allows you twist while you grip the boom .

The new Slick SLS wing comes in lots of sizes and all half sizes to suit your body weight and riding needs we will have these on demo at 2XS. Click here to go the new product on the 2XS website